DANCE AWAY THE NIGHT
Webster Booth and Anne Ziegler spent a large part of their early careers singing in restaurants, hotels and cafés. Many of these establishments were owned by J. Lyons and Company, forebears of the attractive food fundi, Nigella Lawson.  Neither enjoyed singing in these establishments because they were obliged to sing over the conversation of diners, the bustle of waiters and nippies, the clatter of dishes, and in an atmosphere pervaded with the mingling smells of food, drink and tobacco. If you think that these places were the intimate cabaret venues one might find today, think again. Many of these restaurants and cafés were capable of seating 2000 people, most of whom were not paying close attention to the musical entertainment on offer, regarding it as mere background music.

Not only did Webster sing in Lyon’s Restaurants and Cafés, but he was often called upon to sing at Masonic, staff and livery dinners. Webster himself was a Mason and there were Masonic Lodges attached to the Savage Club and the Concert Artistes’ Association.

Webster singing at a Masonic Gathering in the forties.
He was an active member of both and in the 1950s he and Anne were joint presidents of the CAA for several years. I thought that entertainers at Masonic dinners would be limited to men, but women also entertained there. Webster particularly remembered Betsy de la Porte, the South African singer, as a fellow soloist. She took her knitting with her to keep herself busy as she waited to perform. There were close connections between particular restaurants and hotels and various Masonic Lodges. The Skelmersdale Lodge held their meetings at Verrey’s Hotel, Hanover Street from 1926 to January 1928, after which they moved to another hotel.
1 March 1928 – A Newspaper Affair. The Daily Mirror and Sunday Pictorial staffs met at the Holborn Restaurant for their annual dinner and dance on February 24. The concert had as contributors Maude Malins, Webster Booth, Gordon Marsh and Fred Gibson. Jessie Wildon’s Orchestra played during dinner and Frederick Arthur’s Band, under Tommy Parker’s direction, for the dance. Gordon Marsh’s cabaret, Marshmallow, in which the principal was assisted by a smart troupe of girls, including Beryl Lesley and Kathleen Law, was given in an interval in the dances.
Webster’s second wife, Paddy Prior, a comedienne, soubrette and mezzo-soprano, whom he married in October 1932, began entertaining at such dinners when she was not otherwise occupied in seaside summer shows, musical comedies, early television or pantomimes. Early in 1927, she appeared at the Skelmersdale Lodge Masonic Ladies’ night at their meeting place at Verrey’s Hotel, Hanover Street, apparently evoking much laughter amongst the guests with her turn. In 1928 she appeared at Anderton’s Hotel, Fleet Street, the hotel where the Magic Circle held their meetings and which had close associations with the printing profession. The inaugural dinner of the London Press Club had been held there in 1882. She entertained at a Printers’ Charity Concert with other performers, and in 1929 she performed for the Electrotypers & Stereotypers’ Managers’ and Overseers’ Association at Frascati’s Restaurant, Oxford Street.
In January 1928 there was a dinner of the Gallery First Nighters’ Club at the Comedy Restaurant, Panton Street, Haymarket, with Miles Malleson as  guest of honour, where a number of well-known artistes provided the entertainment, including George Metaxa, Webster Booth and Tom Howell (the leader of the Opieros, with whom Webster was working at the time) and a similarly lavish dinner for the Daily Mirror and Sunday Pictorial staffs at the Holborn Restaurant, Kingsway also featured Webster Booth. Below is a photograph of the Masonic Temple at the Holborn Restaurant 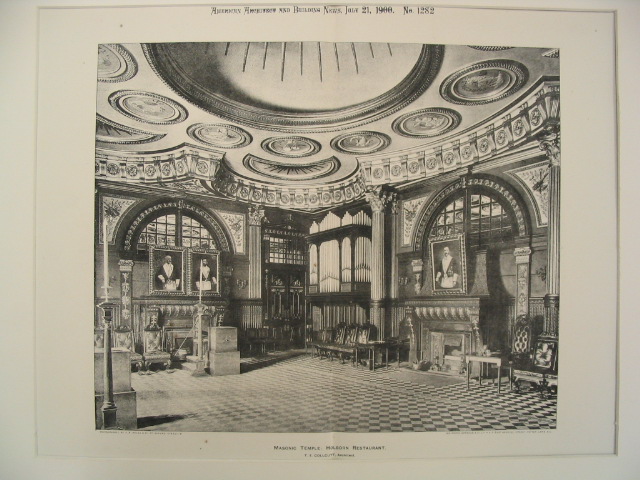 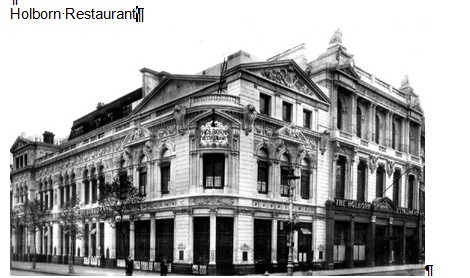 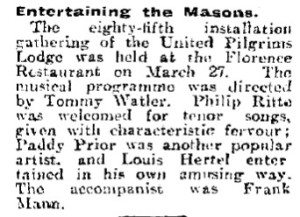 A photo of Paddy Prior taken some years after her divorce from Webster Booth.

Paddy Prior entertains the Masons.

Paddy Prior entertained at Beale’s Masonic Hall, Holloway, while Webster, who was still calling himself by his full name, Leslie Webster Booth, appeared at a variety of Lyons Cafes, such as the Popular Café in Piccadilly, which seated 2000 diners, the Empress Rooms, and the Corner House in the Strand. The Lyons restaurants catered for different social classes. The Trocadero was luxurious and expensive, while other restaurants were more economical. Within the same venue there were often multiple restaurants, some more expensive than others.
Webster met Anne Ziegler during the filming of The Faust Fantasy at the end of 1934, and this meeting was instrumental in ending Webster’s short marriage with Paddy in 1938.Webster and Anne in a scene from The Faust Fantasy (1934/1935)

Even in the 1930s when Webster was making a name for himself on record, radio, in the West End, Oratorio, and on film, he was still entertaining at dinners and at benefit concerts, such as one at the Finsbury Town Hall on 6 March 1930 for the Clerkenwell Benevolent Society, where South African soprano, Garda Hall was one of the other entertainers. Charles Forwood was the accompanist at this concert. Ten years later, Charles Forwood would become the regular accompanist for Anne and Webster in their variety act. In February 1931 Webster and Gladys Ripley (contralto) sang at a dinner for the Hardware and Metal Trades Musical Society at the Cannon Street Hotel. A month later he sang at the Holborn Restaurant for the Entre Nous Club, with comedienne, Suzette Tarri and comedian, Arthur Askey as fellow artists.
I would imagine that entertaining at dinners was more congenial than singing above the general hub-bub in a public restaurant or café, as those attending the arranged dinner would have a specific time set aside to enjoy the entertainment, and this would not have been while waiters were collecting dirty crockery or serving the next course.

The first time that Webster and Paddy Prior appeared together was at a concert for the Bellingham Club on 30 April,1932. They were married on 10 October of the same year. In January 1933 Webster sang at a meeting of the Henley Lodge, held at the Connaught rooms, which had been the headquarters of the Freemasons since 1717.  After a long summer season with Paddy at Scarborough with the Piccadilly Revels later that year, Webster was entertaining the Railway men at the North End Hall, Croydon and for St Dunstan’s at the Regal Kinema, Beckenham. The Lea Valley Growers Association held their annual dinner at the Abercorn Rooms on 1 November with Webster, Bertha Wilmott, Mario de Pietro, and other entertainers, and Webster entertained the Masons of the Welcome Lodge at the Adelaide Galleries on November 15th. On 21 December The Old Friends Society held their ladies festival at the Hotel Victoria. Once again Webster was one of the performers. In the early 1930s he was the guest artist at the New Year’s Annual Gathering of the Luton Industrial Co-operative Society, situated at 3-5 Hastings Street, Luton.

THE JOY OF LIFE

Irené Frances Eastwood had changed her name to Anne Ziegler in 1934 when she arrived in London from Liverpool in 1934 to sing the top voice of the octet in the musical play, By Appointment, which starred the famous soprano, Maggie Teyte. The show was not a success and closed after three weeks. Her father had lost his money in the collapse of the cotton shares so Anne decided to stay on in London to try to forge a career there rather than return to Liverpool and add to her father’s financial woes. She found work singing in Joseph Lyons’ venues, and continued this work, on and off, for two years. She sang at the Regent Palace Hotel, Glass House Street, the Popular Cafe in Piccadilly, The Strand Corner House, the Trocadero, the Café de la Paix, the Café Monico, Piccadilly Circus, the Piccadilly, and the Cumberland Hotel, Marble Arch. She often worked on the same bill as Leslie Hutchinson, “Hutch” at the Cumberland and with tenor Harry Welchman. 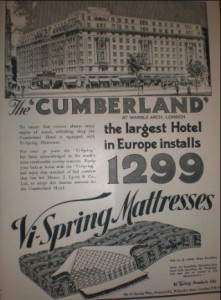 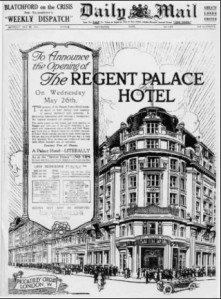 On 20 February 1936 Webster and Paddy Prior contributed to the musical programme at the ladies’ festival of the Hendon Lodge, held at the Piccadilly Hotel and the pair entertained again in April when the Lyric Lodge of Instruction met at Gatti’s Restaurant. Later that month he sang for the annual dinner of the London Meat Trades’ and Drovers’ Benevolent Association at the Connaught Rooms. It demonstrates Webster Booth’s versatility that, on 10 April 1936, he was the tenor soloist in the Good Friday Messiah at the Albert Hall.
On 24 April 1936 he and Paddy attended a big society wedding of Reginald Cave, the son of the Reverend Cave of Handsworth and Vera Holdsworth at the Reigate Parish Church. Webster sang an aria from Mendelssohn’s St Paul, Be Thou Faithful Unto Death during the signing of the register and also sang a number of songs during the reception afterwards. If Paddy had known about his liaison with Anne at that time she must have found it painful and embarrassing to listen to her husband singing that particular aria in the light of what she knew. Be Thou Faithful Unto Death (Mendelssohn)
On 29 April Webster entertained at the annual dinner of the London Commercial Chess League at the Northumberland Rooms, Trafalgar Square, along with Leonard Henry.
The last engagement Webster and Paddy worked together was at the 84th Annual Dinner of the City Musical Union at the Holborn Restaurant on April 30 1936, attended by 500 people. He had met Anne Ziegler during the filming of The Faust Fantasy at the end of 1934, and this meeting brought Webster’s short marriage with Paddy to an end in 1938.
At the end of May 1936, he and Paddy went to the wedding of their friends, Violet Stevens and Bryan Courage and attended the reception at Frascati’s, the last time they were out together as a married couple. I presume that they made an effort to avoid appearing at joint engagements in future. They both continued to perform at dinners, many connected with the Masons, although, by this time Webster was a regular broadcaster, oratorio soloist and film actor.
In January 1937 he sang at the annual dinner of the Ham and Beef National Trade Association at the Holborn Restaurant and at the City Musical Union, this time at the Cannon Street Hotel, and at the Charrilock Social Club dinner at the Trocadero in March.

Webster started singing with Anne in 1937 and literally burnt his boats as far as Paddy was concerned when he went with Anne to New York where she had been booked to appear in the musical, Virginia at the Center Theater there. They were married on 5 November 1938. Not long after their wedding in November, on 17 December Webster sang in a noted performance of Messiah, conducted by Thomas Beecham at the Queen’s Hall in the afternoon. 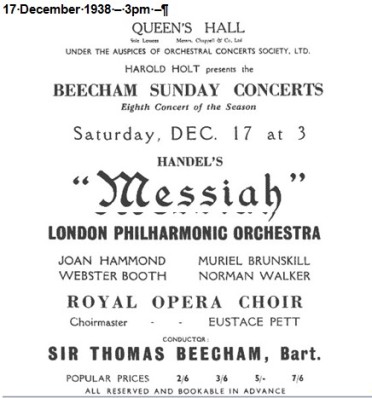 That evening he and Anne sang at a banquet to commemorate the Diamond Jubilee of the Clan Line at the Victoria Hotel. I am grateful to Bernie Furlong for allowing me to share his photos of the menu here. 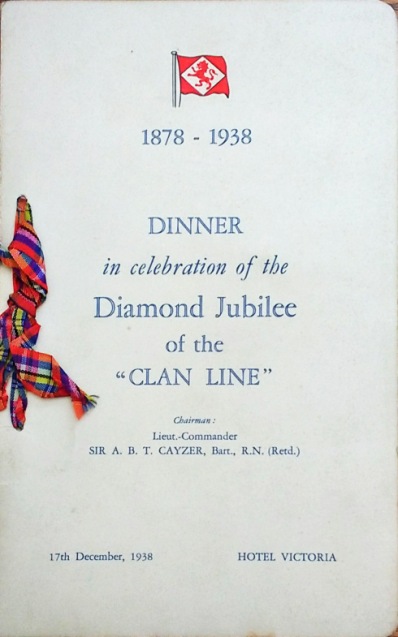 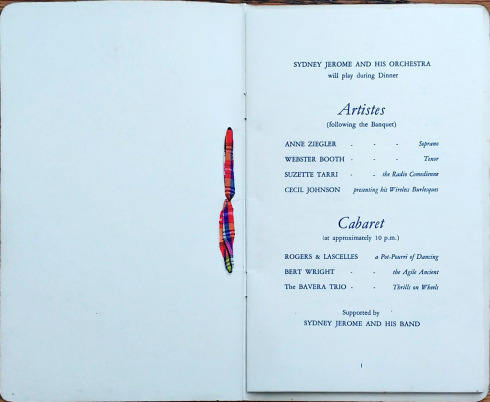 Paddy joined ENSA at the outbreak of war. In 1947 war she immigrated to Australia. Ironically, while Paddy was entertaining the troops in various theatres of war, Anne and Webster rose to great fame as romantic duettists on the variety stages of the UK, but eventually immigrated to South Africa in 1956.

The Booths returned to the UK in 1978 and in December 1979, were invited to present a Sunday afternoon concert at the Cumberland and were given a week’s luxury accommodation there to commemorate their appearances there early on in their careers.
Jean Collen 2010 ©
Updated 22 February 2020

4 thoughts on “ENTERTAINING IN CAFES, RESTAURANTS, HOTELS AND AT MASONIC CONCERTS.”