Webster came out of the studio after the recording and appeared delighted to see us and kissed us both in greeting. He asked what we were doing there, and then said, “Oh, of course, you’re working aren’t you? It’s a pity you can’t stay for the next recording to hear the wonderful trumpeter.” 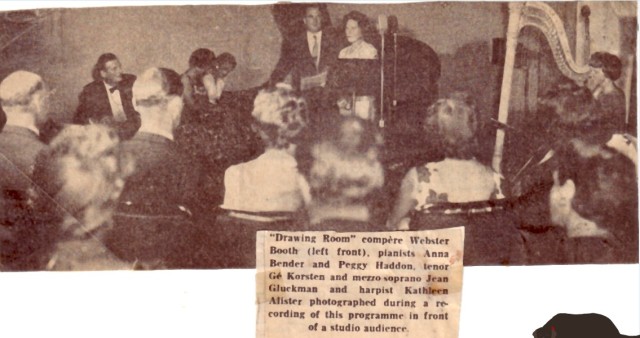 Nearly fifty-seven years ago, in April 1962, Webster Booth presented a short series of drawing room concerts on the English Service of the SABC before an invited studio audience. He and

Anne sang solos and duets in several programmes, and a number of guest
artistes took part. Webster also sang duets with bass, Graham Burns.
Among the guest artistes were Doris Brasch and Rita Roberts (sopranos),
Gert Potgieter and Gé Korsten (tenors), Graham Burns (bass) Jean
Gluckman (contralto), Kathleen Allister (harp), Maisie Flinck and Peggy
Haddon (pianos) and Walter Mony (violin). A trumpeter also appeared in
one of the programmes, but I do not remember his name after all this
time. The accompanist was Anna Bender, the official accompanist at the SABC.

The idea was to create the atmosphere of a polite middle-class Victorian or Edwardian drawing room concert, where singers and instrumentalists performed their party pieces such as In a Monastery Garden, The Maiden’s Prayer, O Dry Those Tears and the like. Sounds of polite conversation and laughter between the items,with restrained applause for the musical offerings were required, so a studio audience was invited to provide these “noises off”.

Shortly before this programme started, Webster wrote an article for the SABC Bulletin on 17 March 1962.

A Nostalgic Half-hour of Memories by Webster Booth.

“Do you remember those Drawing-room concerts our Grandparents used to hold in the afternoons and evenings way back in the late 1800’s and early 1900’s? There were of course, the Society At Homes. These were rather serious affairs, when artistes of repute were engaged. Such artistes as Ben Davis, Madame Patti, Charles Santley and even Madame Melba were paid huge sums of money to entertain the guests.

However, in this new series, to be called Drawing-Room, we want to concentrate on the homely atmosphere, with those lovely old ballads, such as Parted, Little Grey Home in the West, The Rosary, Tosti’s Goodbye, Friend o’ Mine, A Perfect Day, etc., together with those grand pianoforte solos which were all in the Star Folios, and without which no one was considered a pianist. Items like The Maiden’s Prayer, Destiny Waltz, In a Monastery Garden etc. Then the fiddle solos and fiddle obbligatos, vocal duets such as Watchman, What of the Night? Moonlight and Roses and Battle Eve. I so well remember my father, who was Barber-Surgeon to the Royal Staffordshire Regiment, dressing up in his red and gold uniform and singing The Veteran’s Song, and I would be induced to sing in my treble voice, songs like Valé and The Song of Hope, while my mother and sisters had a wonderful evening crying their eyes out. Those were the days when composers wrote songs for the voice, and singers learned to sing ballads. Believe me, those songs needed singing.  They had a story to tell, usually in three verses, all different tempos, portraying passion, joy and tears, and finishing up on a hefty top note.

We intend to invite a small studio audience to help to catch the atmosphere of the drawing-room, and to have well known South African artistes, both vocal and instrumental, to sing and play to us. This  programme will, I am sure, bring to the older listeners a glorious nostalgic half-hour of memories, and will let the younger generations realise there was real music in the home before the advent of the Cinema, Radio and the gramophone. Do tune in to the English programme at 8.30 pm on Wednesday evenings and join us in our Drawing-room. I shall be in charge of the entertainment and Miss Anna Bender will be our Hostess at the pianoforte.”

For the first recording, Webster invited pupils and friends to form part of the Drawing Room in one of the smaller recording studios at Broadcasting House, Commissioner Street. I was very excited when he asked if I would like to attend the recording. My great friend and fellow pupil of Anne and Webster’s, Ruth Ormond, and I were there with our parents and we noticed Lucille Ackerman, another pupil,  accompanied by a large family contingent.

Anne and Webster looked particularly glamorous for the occasion. Anne was wearing a beautiful evening gown, a mink stole – not yet a politically incorrect item of dress  – her fair hair in a chignon, while Webster was in full evening dress, all set to act as compère for the evening and to sing some drawing room ballads into the bargain. The accompanist for the series was Anna Bender, the official accompanist for the SABC. Anne and Webster received their guests graciously. Anne told Ruth and me to save her a seat in the front row, where she sat between us and played her full part in chatting to us between the items on the programme to evoke the atmosphere of a drawing room at the beginning of the twentieth
century.

I’m afraid that this was not the atmosphere conveyed to those listening in to these broadcasts. The polite studio audience applauded vigorously, suggesting the city hall rather than a drawing room. Fifty-seven years later I still remember Miss Rita Roberts (soprano) singing Christina’s Lament to the tune of Dvorak’s Humoresque, Mr Walter Mony (violin), Miss Anna Bender (accompanist) and finally Webster himself, aged sixty and still in fine voice, singing The Kashmiri Song, The Sweetest flower that Blows, Parted, O Dry Those Tears and finally If You Had But Known with violin obbligato by the excellent Mr Mony, a French Canadian, who became a professor and head of the music department at the University of the Witwatersrand.

Ruth and I were entranced to have spent such a happy evening and to see and hear Webster singing only a few feet away from where we were sitting. As we were leaving I told Anne breathlessly that Webster’s singing was wonderful and she replied, “Yes, we’re both very proud of him, aren’t we, darling?” which made me feel rather naïve and childish although I was all of eighteen at the time.

The Drawing Room series was recorded over a number of weeks and we attended another recording when Anne, in a sleeveless black evening dress, sang If No One Ever Marries Me, The Little Damozel and a Handel aria from the opera Xerses, He’ll Say That For My Love. Anne had sung the last song at her Wigmore Hall recital in 1933. Later in that programme she and Webster sang duets together: Drink to Me Only with Thine Eyes and The Second Minuet.

One evening Ruth and I were at a choir practice with the SABC choir and she decided that during our interval, we should go to the Drawing Room studio to say hello to Webster during the break in his recording session. The first programme was not quite finished so we slipped into the studio quietly and listened to Kathleen Alister playing two solos on her harp.

Webster came out of the studio after the recording and appeared delighted to see us and kissed us both in greeting. He asked what we were doing there, and then said, “Oh, of course, you’re working aren’t you? It’s a pity you can’t stay for the next recording to hear the wonderful trumpeter.”

We were both so excited at meeting Webster (not entirely unexpectedly) and being kissed into the bargain, that Ruth walked into the men’s cloakroom instead of the women’s, only to have him politely point her in the right direction. We were both blood red with embarrassment by the time we got back to our seats at our now rather tame choir practice.

I thought Drawing Room was a lovely programme, but the critics had their misgivings about it, saying that the atmosphere created was not quite right, so it was taken off the air after a relatively short time. I once made enquiries at the SABC as to whether any of the programmes existed in their archives, but apparently these had not been kept. I had recorded several programmes via a microphone on my newly-acquired reel-to-reel tape recorder. The sound quality of these recordings is not very good, but when I listen to them all these years later, I am transformed into an excited and optimistic teenager, back in that SABC studio with Ruth and Anne, completely entranced with the music of the Drawing Room.

Sadly, it has occurred to me that most of the people mentioned in this article are now dead and gone, but the memory of that happy time remains vividly in my mind.

Here are links to some of the songs Webster sang on that programme.

The Sweetest Flower that Blows https://clyp.it/0iftdnlr