Here is a copy of a letter sent from “Madeleine” who was on holiday on the Isle of Wight during the summer of 1934. She sent the letter and photograph
below to her friends Lily and Phil, who must have been
fans of Webster Booth.
Dear Lily and Phil,
Thought you would like a Photograph of Webster. We
went to see Sunshine the night before last – they were
great. The weather up to now has been very fine with a
strong wind blowing. I must say I like the Island very much, and I am enjoying myself very much indeed.
Best love to you both,
Madeleine. 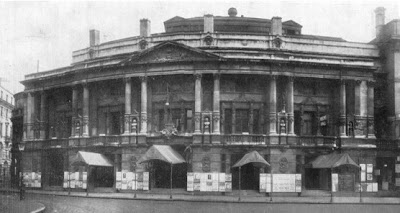 The Queen’s Hall had seventeen entrances to the building in Langham Place, Riding House Street and Great Portland Street and originally seated 3000 people, although, after alterations in 1919, housed only 2,400. It was considered to have excellent acoustics. There was also the Queen’s Small Hall, seating 500 people. This hall opened in November 1893.
While Webster Booth always considered this hall to be his favourite as a singer, he was associated with it as early as 1935 when the unusual film written and composed by Friedrich Feher in which he appeared as a troubadour, was first shown in the Queen’s Hall. The film was called The Robber Symphony. Not only was Webster required to pull a piano through the snow in the Alps during the making of this film, but he also sang several songs written by Mr Feher, one in creditable Italian.
ROMANCE from THE ROBBER SYMPHONY (FRIEDRICH FEHER)
Webster Booth in The Robber Symphony with Magda Sonja 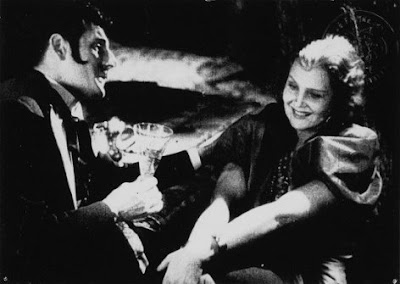 Webster sang many oratorio performances in the Queen’s Hall, including a Messiah, conducted by Sir Thomas Beecham on 17 December 1938. It was at this performance that Australian, Joan Hammond sang the soprano solos in one of her first engagements in England. At that time Joan Hammond had a beautiful lyrical soprano voice, but after further training Webster was surprised to discover that her voice had become very much heavier when he recorded the duet from Madame Butterfly with her in 1943. In order to balance the duet, Miss Hammond had to stand quite a distance behind Webster during the recording, conducted by the (then) Dr Malcolm
Sargent.
DUET FROM MADAME BUTTERFLY: JOAN HAMMOND, WEBSTER BOOTH
By the time this recording was made, the Queen’s Hall had been destroyed by an incendiary bomb. On the afternoon of 10 May 1941 Webster had sung the part of the Soul in Elgar’s Dream of Gerontius at the Queen’s Hall. The other soloists were contralto, Muriel Brunskill (the Angel)  and baritone, Ronald Stear (The Priest and Angel of Agony). The soloists, the London Philharmonic Orchestra and the Royal Choral Society were conducted by Malcolm Sargent. 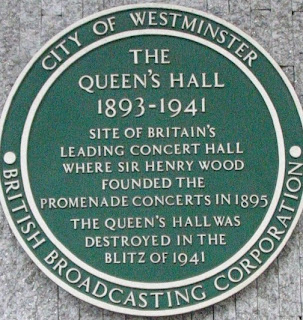 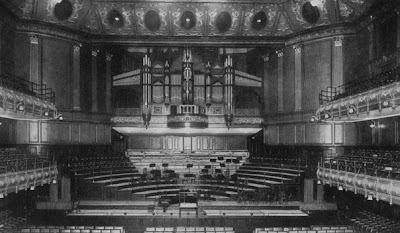 Interior of Queen’s Hall
I have always regretted that no recording was ever made of Webster singing Gerontius, as he was notable in this role. When he immigrated to South Africa he sang in the first South African performance of The Dream of Gerontius in 1957, conducted by a very young Keith Jewell, who became the Cape Town City Organist. Keith Jewell accompanied Anne and Webster in (what was meant to be) their farewell concert in Somerset West, Cape Province in 1975.. 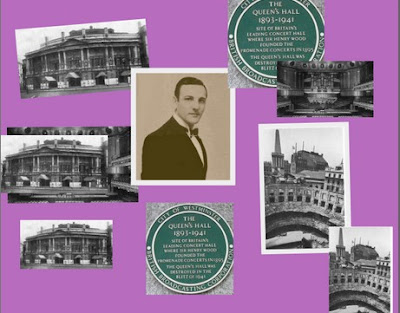 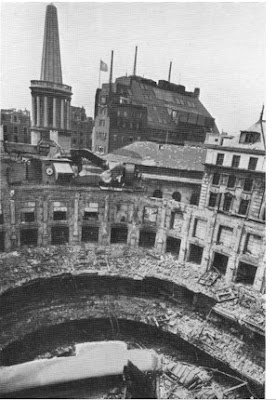 The day in 1941 had been pleasant and sunny, but only a few hours after this performance of  The Dream of Gerontius, the Queen’s Hall was destroyed by a German incendiary bomb. Webster Booth always considered the hall to be the finest concert hall in the
world for a singer. The Promenade Concerts had been held there, but after the destruction of this beautiful hall they transferred to the Royal Albert Hall. Webster Booth said in his joint autobiography with Anne Ziegler, Duet (1951), that many singers were terrified to sing in the Albert Hall after the warm acoustic of the Queen’s Hall, but although he adored the Albert Hall, the Queen’s Hall would always remain his favourite London Concert Hall.
Jean Collen Revised 23 April 2016 ©