Pamela Davies, with whom I collaborated in writing a book entitled Do You Remember Anne Ziegler and Webster Booth? in 2005, asked me recently whether I went to study with Anne and Webster because of their duet singing, but it had nothing to do with that at all. It was entirely due to Mabel that decided me  to study singing with Anne and Webster and to make music my career. 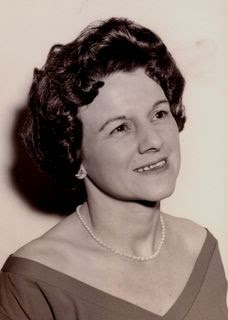 Mabel Fenney later Perkin, née
Greenwood (1960)
When I was in my final year at Jeppe High School for Girls in 1960, the permanent music mistress, Miss Diane Heller, went on long leave, and Mrs Mabel Fenney took her place for a term. Mabel was born Mabel Greenwood on Shakespeare’s birthday in Lytham St Anne’s, Lancashire in 1919. Her mother was a true contralto and had sung in several professional productions. The Greenwoods moved to East London in the Eastern Cape, South Africa when Mabel and her sister were children.
East London Photographs: Marius Garb

Mabel showed singing and acting talent from an early age and did her initial singing exams and diplomas in East London, trained by a gentleman she referred to as “Pop Lee”, and sang and acted in many local musicals, plays and recitals. Her favourite role was as Elsie Maynard in The Yeomen of the Guard. She married fellow Lancastrian, Eric Fenney, and instead of pursuing a singing career, she helped him run his plumbing business in East London.
Scenes from The Yeomen of the Guard in East London with Mabel Fenney as Mabel, Harold Fairbrother as Colonel Fairfax, Joy Huggett as Phoebe and Jimmy Nicholas as Jack Point. Unfortunately I do not know the names of the other principals (circa 1955)

East London (South Africa) production of Yeomen of the Guard. Thanks to Julian Nicholas, son of Jimmy Nicholas for this photograph. 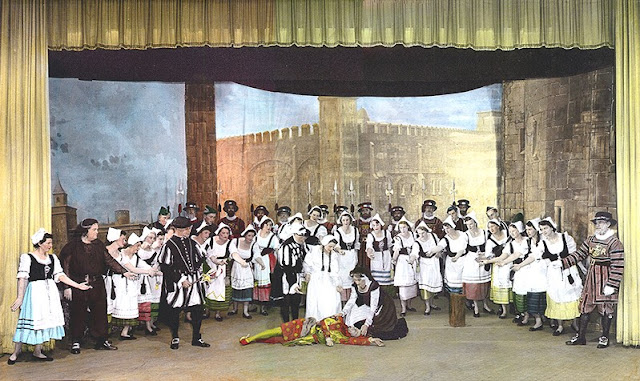 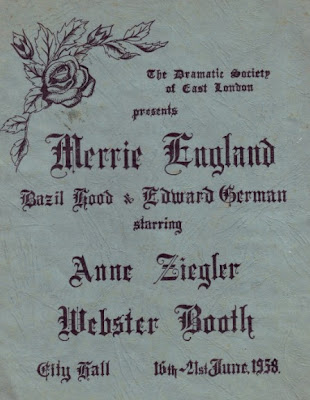 When the Dramatic Society of East London invited Webster Booth and Anne Ziegler to star in the 1958 production of Merrie England, she and Eric stood surety for their salaries.  It was in this production where she first met them, playing their roles of Bessie Throckmorton and Sir Walter Raleigh. She played the part of Jill-All-Alone in the production.

The following year the society put on Waltz Time, again with Anne and Webster in the leading roles, but, for some reason, she was not asked take part in this production.

Waltz Time, East London, 1959.
Instead she went to Johannesburg to have lessons with Anne and Webster in preparation for several advanced diploma singing examinations. By the time she arrived at Jeppe High School for Girls she had already won the University of South Africa’s overseas teaching bursary and was due to leave for Berlin to study at the Hochschule there for two years. Her husband, Eric Fenney had agreed to pay her living expenses while she was studying in Berlin.
We schoolgirls looked on Mabel as a very glamorous figure in comparison with some of our staid academic teachers. She was lively and enthusiastic and took us on various outings to the opera. Most teachers had written off one of the naughtiest classes in the school as impossible to teach, but Mabel developed a good relationship with the girls in that class. She taught them to sing Brother James’ Air, which they performed creditably at the final assembly of the term, giving staff and pupils a pleasant surprise.
Towards the end of her term at Jeppe, Mabel gave a memorable recital in the school hall one afternoon. The event had not been widely publicised, so there were not many people present, but I was there with singing school friends, Margaret Plevin (née Masterton) and Valerie Vogt (née Figgins). We were impressed by her performance. The Booths had decided that she was a mezzo soprano rather than soprano, so she had sung a mezzo repertoire for her diploma exams. I will always remember her singing of the Habanera and Seguidilla from Carmen. At the end of one of the arias she threw a rose coquettishly to her schoolgirl audience. We were completely captivated.

Mabel returned for a holiday to the Eastern Cape in August 1961 and gave this interview to the papers.
Pamela Davies, with whom I collaborated in writing a book entitled Do You Remember Anne Ziegler and Webster Booth? in 2005, asked me recently whether I went to study with Anne and Webster because of their duet singing, but it had nothing to do with that at all. It was entirely due to Mabel that decided me  to study singing with Anne and Webster and to make music my career.

https://www.lulucom/duettists
In 1963 I sang my Trinity College Associate diploma, with Guy McGrath as examiner and Anne as my accompanist. It went well. After the exam, I went with Anne in her pale blue Anglia to Macey’s, a store in the city, where she bought a new carpet sweeper. On the way there she told me that she thought I was going to be another Mabel Fenney. I felt that she had paid me a great compliment in comparing me to Mabel. By this time Mabel had passed her final exam at the Hochschule, although her Professor had disagreed with the Booths’ assessment of her voice and made her revert to her original soprano.
She met her second husband, Maurice Perkin, originally from Bugbrooke, Northamptonshire while she was abroad, and after her divorce from Eric Fenney and remarriage to Maurice, she lived and worked in London for a number of years before returning to South Africa with Maurice. During her time there she sang the role of Susannah in a semi-professional production of The Marriage of Figaro.
I met her again when she was living in Florida (South Africa) in 1976 and we became good friends, visiting each other nearly every week. We also sang duets together at a number of concerts until she and Maurice retired to Uvongo on the South Coast of Natal in the early nineties.
We wrote regularly and I spent a happy holiday with them in Uvongo in the late 1990s. Mabel – or Maimie, as we called her – always said that she had so many interests other than singing and these had prevented her from having the driving ambition to establish herself as a professional singer. She read widely, loved animals, was a keen gardener and an authority on herbs, and took great interest in history. She and Maurice made frequent trips to the Kruger National Park, where she was as interested in the birds they spotted there as in the big five group of animals.
When Anne and Webster returned to the UK and did a series of radio programmes on the BBC called Only a Rose, they singled her out as one of their most talented and hard-working students.
Yesterday I was saddened to learn of her sudden death on 6 March 2011, just over a month short of her ninety-second birthday. She will be sadly missed, but ever remembered by me.
Jean Collen ©
24 March 2011
Updated: 25 August 2019.